(Previous analysis as well as outside sources – italics).

The euro ended a shade higher against the buck going into the European close Monday, after EUR/USD retreated south of 1.13 amid a healthy DXY bid.

In light of recent support from 1.12 on the H4, buyers have likely tucked protective stop-loss orders under the round number.

This unlocks the door to a possible fakeout scenario today, involving a dip through 1.12 into H4 Quasimodo support at 1.1185. Not only would this move trip sell-stop liquidity below 1.12, it would drag in any willing buyers off the Quasimodo formation. A H4 close back above 1.12 off 1.1185, therefore, would likely be a welcomed sight for buyers, targeting 1.13.

Sterling extended losses Monday amid a DXY recovery off lows at 97.11, exploring levels south of June’s opening level at 1.2345 and eventually the 1.23 handle on the H4. Quasimodo support at 1.2248 also came to light yesterday, a level which if breached potentially sets the stage for an approach to 1.22.

Following two consecutive losing weeks south of a 61.8% Fibonacci retracement ratio at 1.2718 and 2019 yearly opening level at 1.2739, GBP/USD finished unchanged last week, though considerably off best levels.Navigating deeper waters on the weekly timeframe invites an approach to Quasimodo support at 1.2163.

The daily timeframe, meanwhile, has price action stationed beneath trend line support-turned resistance, taken from the low 1.1409. The route lower appears one-way towards support coming in at 1.2014, sited just south of the 1.2075 May 18 low. Before reaching this far south, though, weekly Quasimodo support must be absorbed at 1.2163.

For those who read Monday’s technical briefing you may recall the following (italics):

With the weekly timeframe pointing to the likelihood of further selling over the coming week, targeting 1.2163, bearish scenarios south of June’s opening level at 1.2345 on the H4 and on a break of 1.23 may be of interest. Conservative traders will likely seek a retest at the underside of the aforementioned levels before committing.

Alongside keeping an eye on the underside of the said levels as resistance, traders may also want to watch for a break of H4 Quasimodo support at 1.2248 today for potential bearish scenarios to 1.22, and possibly beyond. 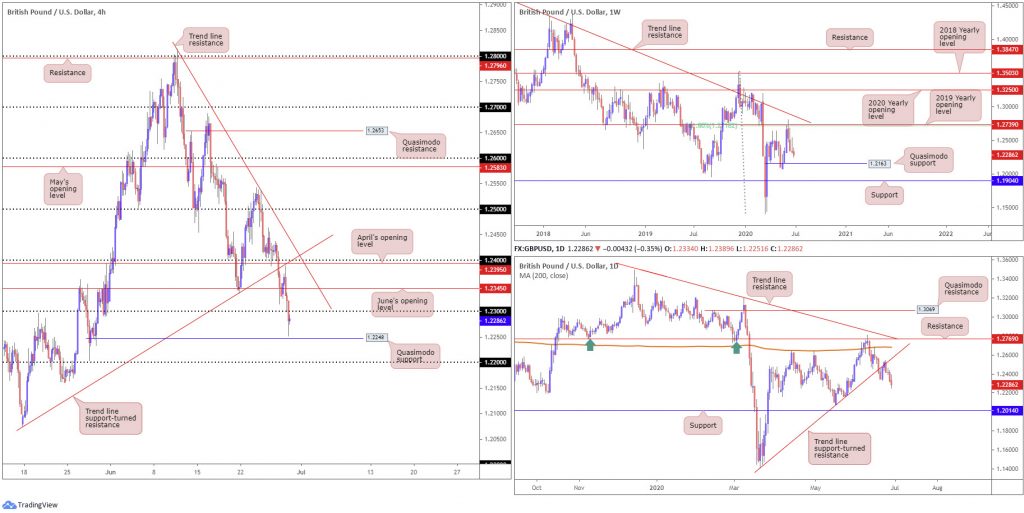 AUD/USD essentially finished another day unmoved, cruising under the 0.69 handle with downside remaining contained around 0.6850ish on the H4. Sidestepping 0.6850, the highway south seems clear until the 0.68 juncture. Technically speaking, this figure also throws across a Quasimodo support (black arrow denotes the left shoulder).

Resistance, forged in the shape of a 2020 yearly opening level and a 2019 yearly opening level, at 0.7016 and 0.7042, respectively, continues to offer a dominant presence on the weekly timeframe. It might also interest traders to note that just above the said resistances we have a 61.8% Fibonacci retracement ratio at 0.7128 (green). In terms of support, crosshairs are perhaps fixed on 0.6677.

From the daily timeframe, Quasimodo resistance at 0.7049 is in sight, merging closely with trend line support-turned resistance, taken from the low 0.6670. Attention on this timeframe also remains at support coming in from 0.6751. Interestingly, lurking beneath here we also have the 200-day SMA (orange – 0.6665), located close by weekly support mentioned above at 0.6677.

According to technical research, in particular the breach of 0.69 to the downside, sellers may have the upper hand.

A retest at the underside of 0.69 (red arrows), one that preferably holds by way of a H1/H4 bearish candlestick pattern, would likely appeal to sellers, targeting the 0.68 neighbourhood as an initial take-profit zone. Aggressive traders, on the other hand, will already likely be short the break of 0.69, with protective stop-loss orders possibly tucked above 0.6922 (blue arrow), the top edge of a local supply resting above 0.69. 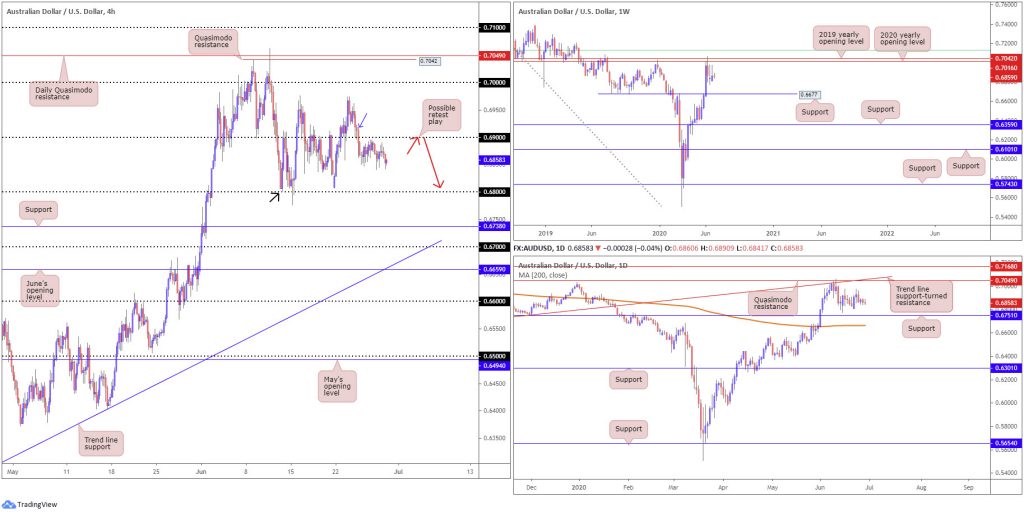 The US dollar concluded strongly higher against the Japanese yen Monday, extending space north of 107 handle on the H4. Flow also overthrew Quasimodo resistance at 107.57 and marginally surpassed June’s opening level at 107.73 to test the 127.2% Fibonacci extension point at 107.82 (sited just ahead of 108). Consequently, 107.57 is now likely to serve as support.

Quasimodo support at 106.35 on the daily timeframe nudged its way into the limelight last week and has so far delivered healthy upside. The possibility of further buying, therefore, remains, with crosshairs fixed on the 200-day SMA (orange – 108.37) as an upside objective.

Having noted room for buyers to stretch their legs on both the weekly and daily timeframes, targeting 108.37 (daily) and 108.62 (weekly), the H4 support at 107.57 could hold ground and provide a platform to consider buying opportunities from. This would, of course, entail going up against H4 resistances at 107.73 and 107.82, as well as 108.

Conservative traders, to help avoid an unnecessary loss in the event we fail to override nearby H4 resistances, may consider waiting for additional confirmation off 107.57 before pulling the trigger. 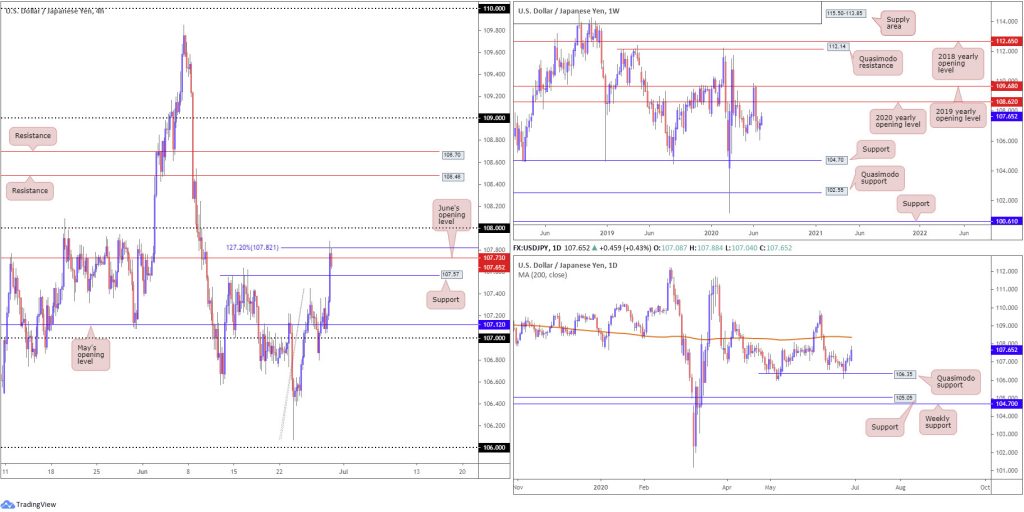 USD/CAD remained capped south of 1.37 Monday, unable to gain a foothold above the round number. WTI prices concluded higher, climbing through $39.50/bbl. The US dollar index, on the other hand, ended unchanged, though considerably off worst levels.

Price action on the daily timeframe recently took over the top edge of a falling wedge pattern (1.3686/1.3504) and also nearby resistance at 1.3653. Friday, as you can see, overthrew the aforementioned resistance, with Monday retesting the base as support. Take-profit targets out of falling wedges can be measured by taking the base value and adding this figure to the breakout point (black arrows), which as you can see in this case, converges closely with the next daily resistance at 1.3807.

Both weekly and daily timeframes exhibit scope to explore higher levels, and therefore point to a break of 1.37 to the upside.

A H4 close above 1.37, in light of the higher timeframe’s position, may have breakout buyers jump on board. Conservative traders may at least want to see a retest at the round number occur before engaging. Irrespective of the entry technique, the upside target falls in at the H4 resistance area from 1.3822/1.3780 (made up of June’s opening level at 1.3780, a 127.2% Fibonacci extension point at 1.3786, the 1.38 handle and Quasimodo resistance at 1.3822).

In view of the confluence around 1.3822/1.3780, both on the H4 and higher timeframes (daily resistance converges with the area at 1.3807 and weekly resistance also at 1.3814), not only does this make for a logical target for longs north of 1.37, it also puts forward a tidy resistance zone to work with for possible shorting opportunities. 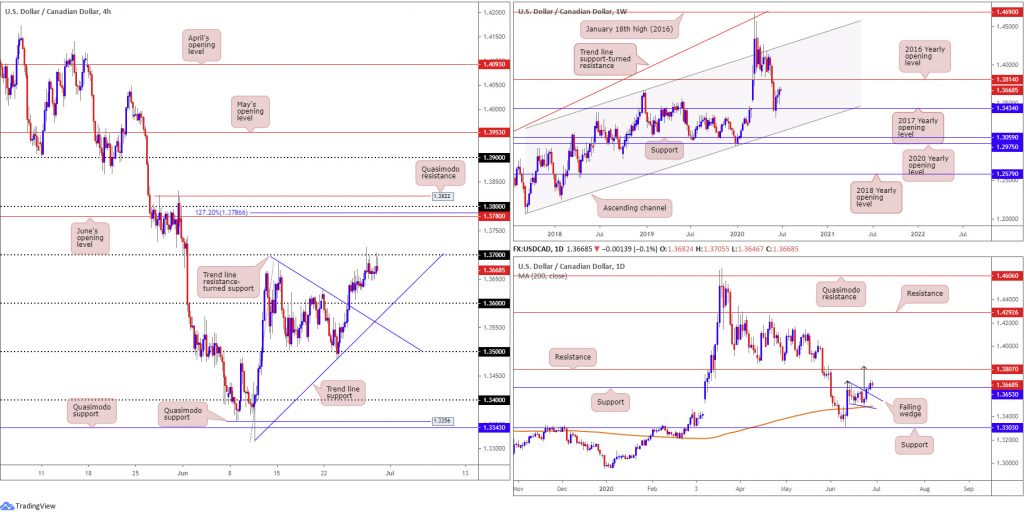 On the daily timeframe, the initial break of weekly support at 0.9447 (11 June) threw breakout sellers into a bear trap as daily buyers vigorously defended AB=CD structure (black arrows) at 0.9395. The initial upside target out of the daily AB=CD pattern, traditionally speaking, can be found at the 38.2% Fibonacci retracement ratio at 0.9580 (derived from legs A-D), positioned above resistance at 0.9542, which, as you can see, has so far done a superb job in holding back buyers. In the event we overrun 0.9542 and also 0.9580 we could, according to traditional measures, cross swords with the next AB=CD target at 0.9705, the 61.8% Fibonacci retracement ratio, also taken from legs A-D. This implies a push above trend line resistance, taken from the high 0.9901.

Weekly support at 0.9447 remains a key level in this market. Therefore, until this level surrenders, bullish strategies may be the way forward for the time being.

For traders who read Monday’s technical briefing you may also recall the following (italics):

A break of 0.95 may be on the cards, attracting breakout buying to H4 Quasimodo resistance at 0.9525 and daily resistance at 0.9542, followed by a possible pop to the 38.2% Fibonacci retracement ratio at 0.9580 on the daily timeframe (the initial take-profit target out of the daily AB=CD pattern).

Well done to any readers who managed to latch onto a bid above 0.95. Intraday buyers have likely reduced risk to breakeven on the test of H4 Quasimodo resistance at 0.9525, with the expectation of follow-through moves to daily resistance at 0.9542.

Since June 16, the 200-day SMA (orange – 26280) has absorbed upside attempts, with Monday bringing in support from 24934 on the daily timeframe. In case buyers lack follow-through here, dipping a toe in waters south of 24934 may see support at 23291 call for attention. Another key observation is a potential AB=CD correction (blue arrows) at 23553.

Having seen buyers attempting to establish a position north of weekly support (2018 yearly opening level) at 24660 and also daily support at 24934, trying to fade March’s opening level at 25823 and trend line resistance on the H4 may be difficult.

Equally difficult, though, is trying to enter into long positions above H4 trend line resistance, as the 200-day SMA lurks close by at 26280. 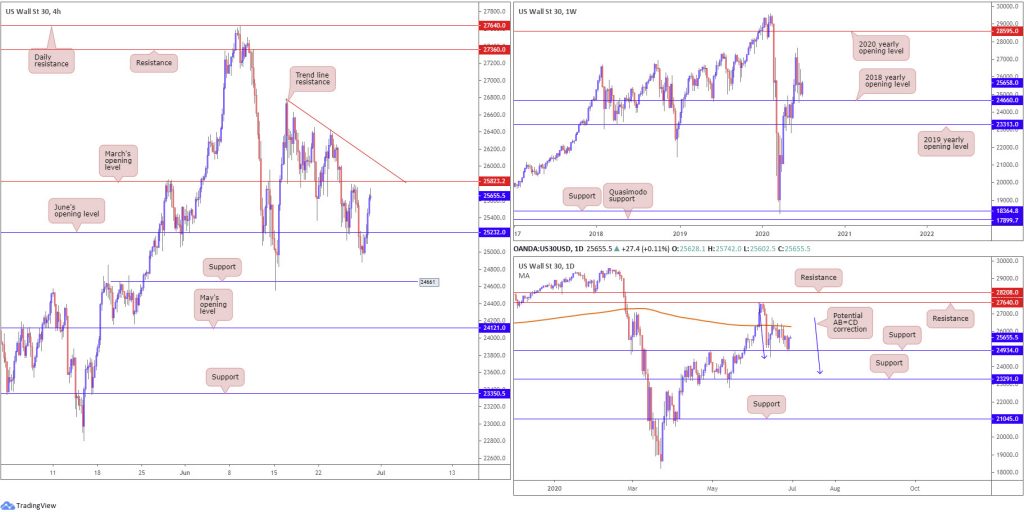 Gold prices ended Monday pretty much unmoved, forming an indecision candle on the daily timeframe. In light of this, much of the following analysis will echo thoughts put forward in Monday’s technical briefing.

From the weekly timeframe:

1739.6, therefore, could serve as support going forward, with another Quasimodo resistance at 1787.4 also on the radar.

Resistance at 1747.0 gave way in early trade last week, laying the foundation for an extension to the weekly Quasimodo resistance mentioned above at 1787.4. Notably, from the daily timeframe, we can see Friday retested 1747.0 as support in the shape of a hammer candlestick pattern. This presents a potential bullish vibe.

Last week faded a clear-cut H4 ABCD correction that topped around 1780.0ish (black arrows), with Friday aggressively spiking to lows just ahead of support at 1744.5.

Most ABCD traders will still be watching for a dip to the 38.2% Fibonacci retracement at 1736.7 (derived from legs A-D), which, as you can see, converges closely with June’s opening level on the H4 at 1738.1.

What’s also interesting is the recently engulfed weekly Quasimodo resistance at 1739.6 could, as highlighted above, serve as support going forward – this level merges closely with our 38.2% Fibonacci retracement on the H4 at 1736.7.

As for upside targets, weekly Quasimodo resistance at 1787.4 remains prominent on all three timeframes right now.

Traders short the H4 ABCD correction, as emphasised above, will likely have eyeballs on the 38.2% H4 Fibonacci retracement at 1736.7 as an initial target.

The threat of further buying on the higher timeframes, however, poses a real threat to H4 sellers. This is evident from daily support recently making its presence felt and price action printing a bullish candlestick signal (hammer pattern). As a result, along with the fact the overall trend has faced north since 2016, this could be enough to draw in additional buyers (with most basing entry and exit levels on the daily hammer pattern), targeting weekly Quasimodo resistance at 1787.4 as an initial upside base.

The accuracy, completeness and timeliness of the information contained on this site cannot be guaranteed. IC Markets does not warranty, guarantee or make any representations, or assume any liability regarding financial results based on the use of the information in the site.

News, views, opinions, recommendations and other information obtained from sources outside of www.icmarkets.com.au, used in this site are believed to be reliable, but we cannot guarantee their accuracy or completeness. All such information is subject to change at any time without notice. IC Markets assumes no responsibility for the content of any linked site.

The fact that such links may exist does not indicate approval or endorsement of any material contained on any linked site. IC Markets is not liable for any harm caused by the transmission, through accessing the services or information on this site, of a computer virus, or other computer code or programming device that might be used to access, delete, damage, disable, disrupt or otherwise impede in any manner, the operation of the site or of any user’s software, hardware, data or property.

Brexit – UK said to be planning “sweeping” tax cuts, up to 10 new “freeports”

US moves against the Hong Kong dollar peg are unlikely for now, officials backpedal