The week is ending with the USD as the weakest of the major currencies today. The NZD was the strongest. 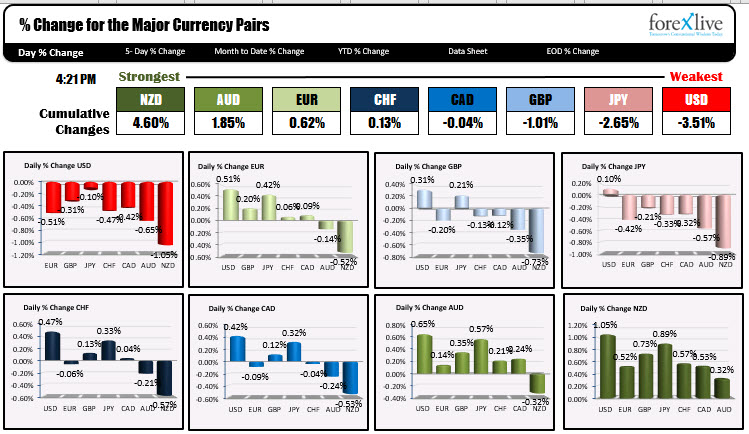 The fall in the USD was helped by a disappointing retail sales number for April. The expectations were for a rise of 1.0% for the headline number and +0.7% for ex auto. The actual numbers came in at 0.0% for the headline and -0.8% for the ex auto.  The saving grace was that revisions were higher, but the trend for the most recent month was not as great as the market was thinking -especially with the stimulus checks.

The data on the surface today seemed more negative then it really was as the revisions higher saved the day.  However, what may have helped the dollar selling was the rise in the stock market and move lower in yields.

One of the Pavlovian reactions in the forex market is if the stocks are strong, there tends to be a lean into the “risk on” currencies like the NZD, AUD and even the EUR, and a contrasting lean out of the ‘relatively safety’ of the USD and JPY. That is how it worked out today as the major indices saw solid gains of 1.06% for the Dow, 1.49%  for the S&P and they solid 2.32%  For the Nasdaq.  Those numbers pushed flows into the NZD and AUD (they were the  strongest of the majors) and out of the USD and JPY (they were the weakest today).

The move lower in yields also helped to weaken the greenback. The 10 year yield moved lower by about -2.7 basis points, while the longer 30 year bond yield fell by nearly double -5.3 basis points on the day. The debt market traders seem to be relieved that there was not a disaster during the monthly 3, 10 and 30 year auctions this week.  There was concerns that with poor auctions, the 10 year could look to approach 2.0%.  Instead the yield in the 10 year is ending at 1.63%.

How did the major markets shake out for the week?

Looking at the US stocks this week, the major indices are closing lower (the NASDAQ has been down for four consecutive weeks now). The declines were led by the NASDAQ with a fall of -2.34%. The S&P fell -1.39% and the Dow was lower by -1.14%.

In the debt market in Europe and the US this week, the benchmark 10 year yields were higher. Italy yields rose 10.6 basis points for the week. The US 10 year – although lower today – was still up 5.47 basis points on the week as there was some selling (move higher in yields) into the auctions.

What did the yield curve do in the US this week?

Two years were relatively unchanged, while the 30 year moved up 6.61 basis points.  So a bit steeper, but with the confines of the recent levels.

Lower stocks/higher yields did push the USD marginally higher for the week. Looking at the weekly changes below, the USD had marginal changes vs the EUR, CHF and CAD was lower vs the GBP but was higher vs the JPY, AUD and NZD.

For the week, the GBP ended as the strongest of the majors helped by the follow through buying of the pound after the Scottish elections (less of a chance for a referendum).  The AUD and JPY were the weakest as the dust settled into the close of business.  . 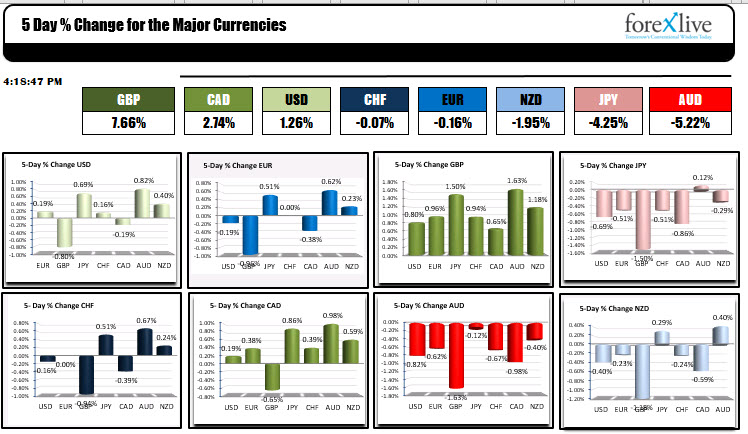 A snapshot of other market near the end of the week shows:

Wishing you all a happy and healthy weekend.

Italy Global Trade Balance increased to €5.87B in April from previous €5.19B