GBP/USD Outlook: 1.4200 mark might continue to cap the upside, at least for now

The GBP/USD pair had good two-way price swings on Thursday and was influenced by a combination of diverging forces. The pair witnessed some selling through the first half of the trading action and was weighed down by the EU-UK collision over Northern Ireland protocol. It is worth recalling that talks between UK Brexit Minister David Frost and European Commission vice-president Maros Sefcovic to resolve differences over the Brexit deal broke up without a breakthrough. In a further escalation of the dispute, the EU warned of swift and firm action if the UK fails to implement its post-Brexit obligations.

As investors digested the latest Brexit developments, the pair witnessed a dramatic turnaround and rallied over 100 pips from the 1.4075-70 region. The strong intraday bounce was sponsored by the emergence of some fresh selling around the US dollar, despite hotter-than-expected US consumer inflation figures. Investors seem convinced that the Fed will wait for further evidence to see if inflationary pressure is sustainable before moving to taper its bond purchases. This was evident from a sharp fall in the US Treasury bond yields, which undermined the greenback and provided a strong lift to the major.

According to the data published by the US Bureau of Labor Statistics, the headline US CPI increased 0.6% MoM and accelerated sharply to a 5.0% YoY rate, marking the biggest annual gain since August 2008. Adding to this, the Core CPI (excluding food and energy prices) rose 0.7% MoM and 3.8% YoY, both surpassing consensus estimates. The price action, however, suggested that investors agree with the Fed’s narrative that any spike in inflation is likely to be transitory and that pricing pressures will abate later in the year. This means that the Fed will retain its accommodative monetary policy stance for a longer period.

The pair finally settled near daily tops and snapped two consecutive days of the losing streak. The momentum, however, lacked follow-through amid worries that the UK may delay its plans to end restrictions fully on June 21 in light of the spread of the so-called Delta variant. Apart from this, weaker US macro releases further collaborated toward capping the upside. The UK monthly GDP showed that the economy expanded by 2.3% in April. This was slightly lower than the 2.4% growth anticipated, still better than the 2.1% rise in the previous month. Separately, the UK Industrial and Manufacturing Production also fell short of market expectations.

Market participants now look forward to a scheduled speech by the Bank of England Governor Andrew Bailey for some impetus. The US economic docket features the only release of the Preliminary Michigan US Consumer Sentiment index. This, along with the US bond yields, will influence the USD price dynamics and produce some trading opportunities on the last day of the week.

From a technical perspective, the pair on Thursday bounced from support marked by the lower boundary of a two-month-old ascending trend channel. The subsequent strong move up favours bullish traders. That said, it will still be prudent to wait for a sustained strength beyond the 1.4200 mark before positioning for any further appreciating move. The next relevant hurdle is pegged near the 1.4230-35 horizontal zone, above which the pair seems all set to surpass YTD tops, around mid-1.4200s and aim to reclaim the 1.4300 mark. The momentum could further get extended towards testing the trend-channel resistance, currently near the 1.4340-45 region.

On the flip side, the 1.4150 area now seems to protect the immediate downside. This is followed by support near the 1.4110-1.4100 region, which if broken would expose the trend-channel support near the 1.4080-75 region. Sustained weakness below will shift the bias in favour of bearish traders and turn the pair vulnerable to challenge the key 1.4000 psychological mark. Some follow-through selling has the potential to drag the pair further towards the 1.3940 region end-route the 1.3900 round-figure mark. 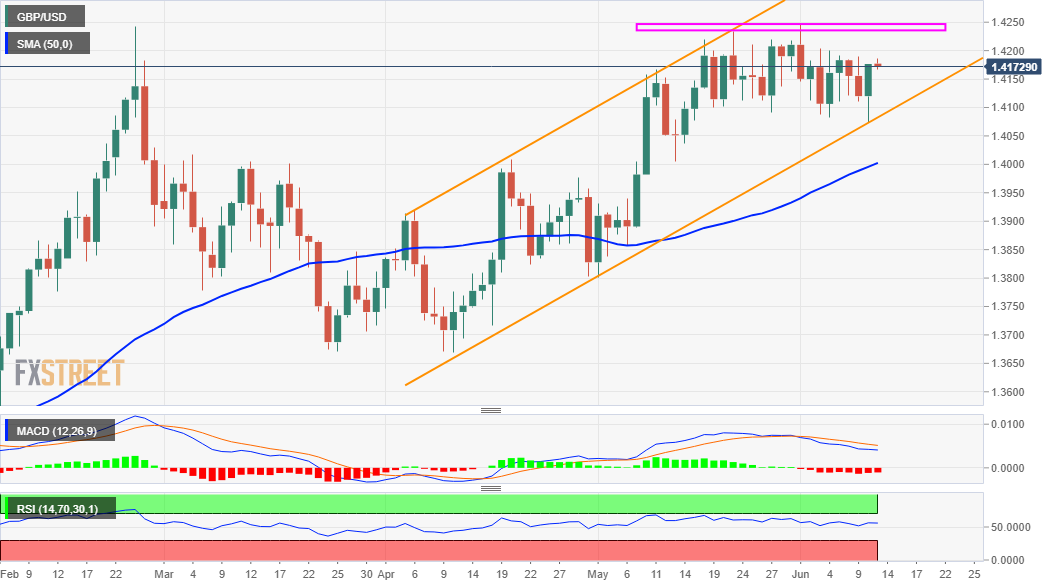 Hong Kong SAR Unemployment rate came in at 6%, below expectations (6.2%) in May