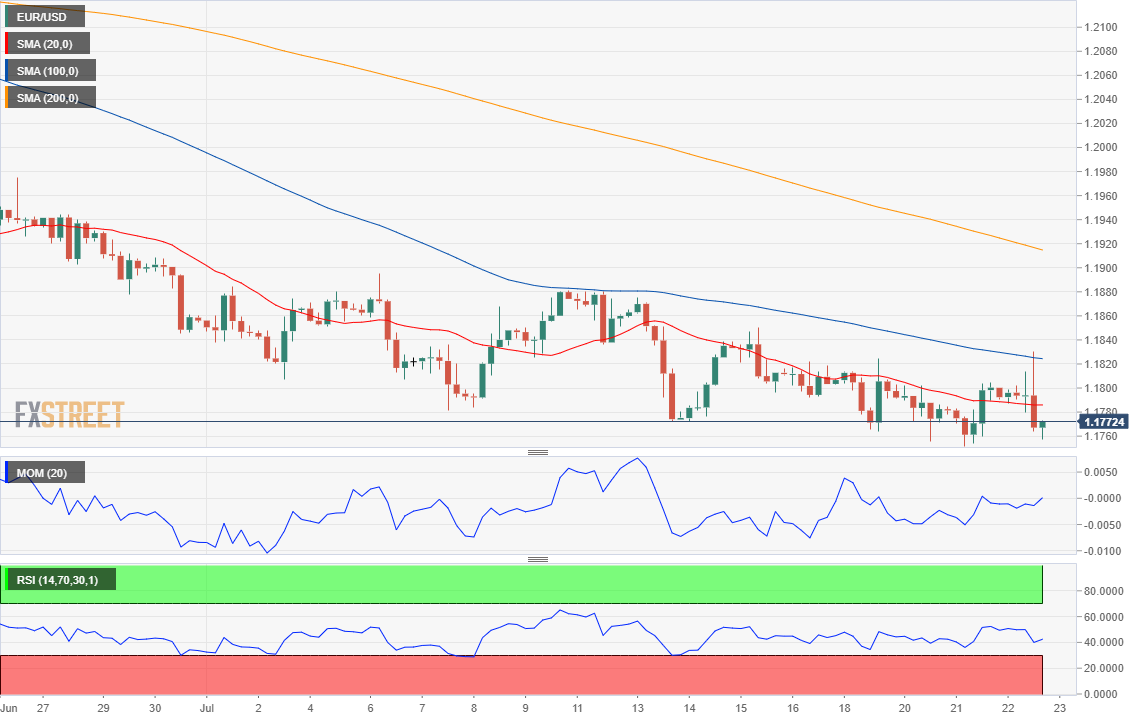 The EUR/USD pair is ending Thursday in the red and at weekly lows, trading at around 1.1770 after a failed attempt to break higher. The European Central Bank announced its decision on monetary policy, and as widely anticipated, it left rates and the facilities programs unchanged. The announcement was disappointing as the so-awaited forward guidance was vague. The Government Council noted that interest rates will remain at present or lower levels “until it sees inflation reaching two per cent well ahead of the end of its projection horizon and durably for the rest of the projection horizon, and it judges that realised progress in underlying inflation is sufficiently advanced.”

President Christine Lagarde added that the economy is on track for strong growth in Q3 but added that the coronavirus Delta variant could dampen the recovery in services while bottlenecks could affect manufacturing in the short term. Meanwhile, the US published Initial Jobless Claims for the week ended July 16, which increased to 419K, missing the market’s expectations. The Chicago Fed National Activity Index printed at 0.09 in June, down from the previous 0.26. Finally, Consumer Confidence in the EU resulted in -4.4 in July, worse than anticipated. On Friday, Markit will publish the preliminary estimates of its July PMIs for the EU and the US.

The EUR/USD pair trades at the lower end of its weekly range, bearish in the near-term. The 4-hour chart shows that the pair aimed to break above the roof of the descendant channel that guides price since June. The pair topped around a mildly bearish 100 SMA, now developing below all of its moving averages. Technical indicators consolidate within negative levels, skewing the risk to the downside without confirming another leg south.

View Live Chart for the EUR/USD

Ethereum Classic price squeezed, puts ETC on the verge of a sharp move

AUD/NZD Price Analysis: Bears in control ahead of RBA