Shiba Inu price is on the cusp of a 39% explosion

Shiba Inu price is on the frontline of ushering in the weekend with a daily bullish candle alongside other crypto assets such as Solana, Binance Coin and Polkadot. SHIB’s trading over the last few days has been somewhat sideways. Conversely, a bullish breakout may be in the offing, especially if the token makes a daily close above $0.00001220.

Shiba Inu price formed an inverse head-and-shoulders (H&) pattern between May and August, as seen in the chart below. Crucial support at $0.00000740 allowed buyers to regain control against the backdrop of dire losses in May. This buyer congestion zone positively influenced SHIB but only up to $0.00001220.

Since the H&S pattern is highly bullish, Shiba Inu price has a good chance of sprinting to $0.00001679 – if it can make a clean break above the neckline. For now, buyers must subdue the overhead selling pressure brought to light by the 200-day Simple Moving Average (SMA) on the 12-hour chart.

The Moving Average Convergence Divergence (MACD) in the same timeframe would be required to hold above the mean line as well as keep the buy signal intact, affirming a solid bullish grip. 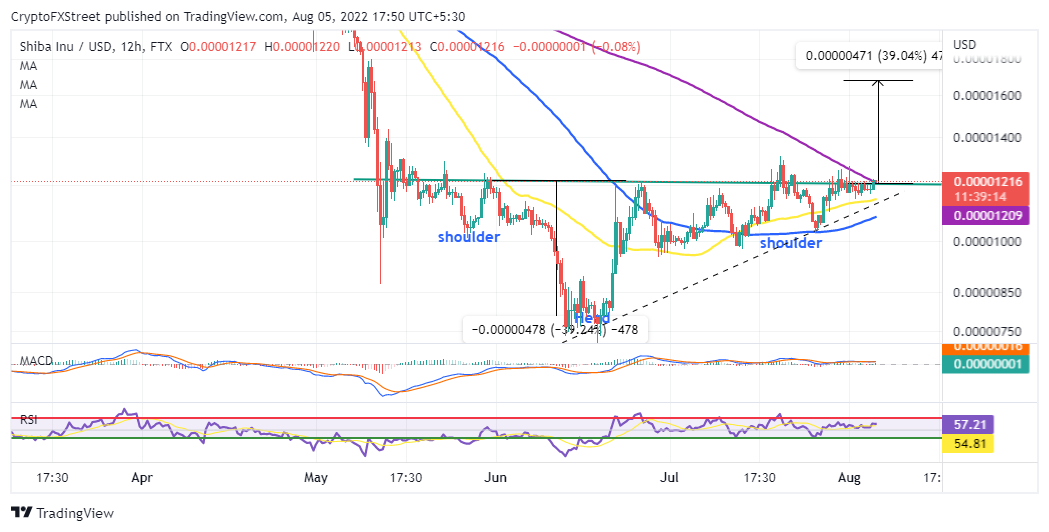 On the flip side, the 50-day SMA provides immediate support slightly above an ascending trendline. Therefore, in the event of a bearish reversal, Shiba Inu price may recoil at a higher low, as long as the trend line is not broken.

From a fundamental perspective, Shiba Inu may exhaust the uptrend in the region between $0.00001400 and $0.00002100. IntoTheBlock’s IOMAP on-chain metric reveals that around 101,000 addresses previously purchased approximately 445.9 trillion SHIB tokens in the range.

Traders preparing to make the most out of Shiba Inu price breakout to $0.00001679 should consider taking profit at $0.00001400, with the bullish holding out till $0.00001700. These targets factor in overhead pressure as investors sell at their respective breakeven price points.