What is Bitcoin doing ?

After hitting an all time high of 19,893$ last year on the 11th of December 2017, Bitcoin started to loose of value . Price is currently SLOWLY moving bellow 8K; it has lost more than 50% of it value. Owing to the volatility, BlackRock’s Mateos Y Lago warned that investors should be cautious when buying into the bitcoin market.

Speaking to Bloomberg, the global chief multi-asset strategist said there is an “enormous amount of interest” from companies looking to buy into bitcoin. Ms Lago said: “At this stage, there are huge issues. There are safety issues, liquidity issues, regulatory risks. This is a very new thing, and to us, at this stage, is not an investible asset class. This is not something we are advising anybody to put money in, unless they are willing to lose their entire stake.”

Last Year The Founder and owner of Swingfish Plateform(This one :p) Mario Hennenberger compared Bitcoin to the tulips just before the decline started in November. Back in 1636ish a huge price surge occured but followed right after by a sharp death by late 1637. Is it possible that Bitcoin is sharing the same destiny? 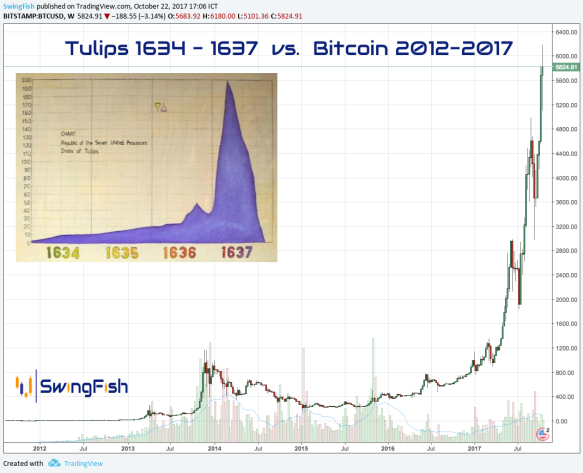 Lets review some pro and cons for Bitcoin:

1. Protection From Payment Fraud
Bitcoins are digital and cannot be counterfeited or reversed arbitrarily by the sender. According to a report written by Henry Taylor, trading bitcoins using auto trading systems is secure as there are no indications of scam or insincere actions on the website.

2. Reduced Possibility of Identity Theft
When you give your credit card to a merchant, you give him or her access to your full credit line, even if the transaction is for a small amount. Credit cards operate on a “pull” basis, where the store initiates the payment and pulls the designated amount from your account. Bitcoins use a “push” mechanism that allows the bitcoin holder to send exactly what he or she wants to the merchant or recipient with no further information. Furthermore, bitcoins do not require names – just digital wallet IDs.

3. Direct Transfers for Immediate Settlement
Purchasing real property typically involves a number of third parties, delays, and payment of fees. In many ways, the bitcoin block chain is like a “large property rights database,” says Gallippi. Bitcoin contracts can be designed and enforced to eliminate or add third party approvals, reference external facts, or be completed at a future date or time for a fraction of the expense and time required to complete traditional asset transfers.

5. Lower Fees
There aren’t usually transaction fees for bitcoin exchanges because the bitcoin miner is compensated by the network with newly issued bitcoins. Even though there’s no bitcoin transaction fee, many observers expect that most users will engage a third-party service, such as Coinbase, in lieu of creating and maintaining their own bitcoin wallets. These services act like Paypal does for cash or credit card users, providing the online exchange system for bitcoin, and as such, they’re likely to charge fees. It’s interesting to note that Paypal does not accept or transfer bitcoins. Find the reliable experts at https://www.unsecuredpersonalloansnow.com/unsecured-personal-loans/new-mexico.

You can click here for more information about Paypal and perfect money exchange.

There is actually one reason big enough for bitcoin not to be able make it;

Some believe the appeal of bitcoin is that it can be used anonymously for illegal or antisocial acts. According to Mercedes Kelley Tunstall of Ballard Spahr LLP, “Bitcoin has built its reputation and structured its virtual currency around being both anti-government and anti-establishment.”

According to an analysis published in The Wall Street Journal by Campbell Harvey, a finance professor at Duke University, bitcoins have been 7.5 times as volatile as gold, and more than eight times as volatile as the S&P 500 over the last three years. This coincides with the analysis of Marie Brière, associate professor of Universiteé Paris Dauphine in France, who calculated an annualized return of 370% for bitcoins with 175% volatility. Such violent price movements within short time periods are not consistent with an ideal exchange medium for buyers or sellers, limiting bitcoins as a significant vehicle for businesses. On a Price action Point on view, Bitcoin prices are exposed to 4600, 3000 and as lower as 1444$ where it can possibly bounce to reverse or/and  officialy DIE.

In a short time, Bitcoins have captured the attention of financial speculators, con-men, and cyber punks alike. Are bitcoins a real solution to the need for a transaction system suited to the Internet Age, or just another way for unwitting sheep to be sheared of their assets as they’re led to slaughter? The concept is intriguing. The demand for a suitable virtual currency is real; however, it’s simply too soon to project whether bitcoins are the answer, or just another speculative boom.

If you decide to buy bitcoins or take them in exchange for your goods or services, limit your risks. Remember that the risks of engaging in virtual currency transactions are entirely your own.

What do you think about bitcoins? Do you own any? Will you buy them as an investment or speculation? Will you take advantage of an investment opportunity provided by Brooklyn Hard Money Lending – Cash Out Refinancing | Investors Choice?

But do not consider bitcoin as the best way for ivesting all your money, as well as for earning and savings. Better check how to find a college savings plan or other savings plans, to be sure, that you will have money in the long run. Also, refer to fousalerts review to learn the art of stock trading for good returns on your investment.