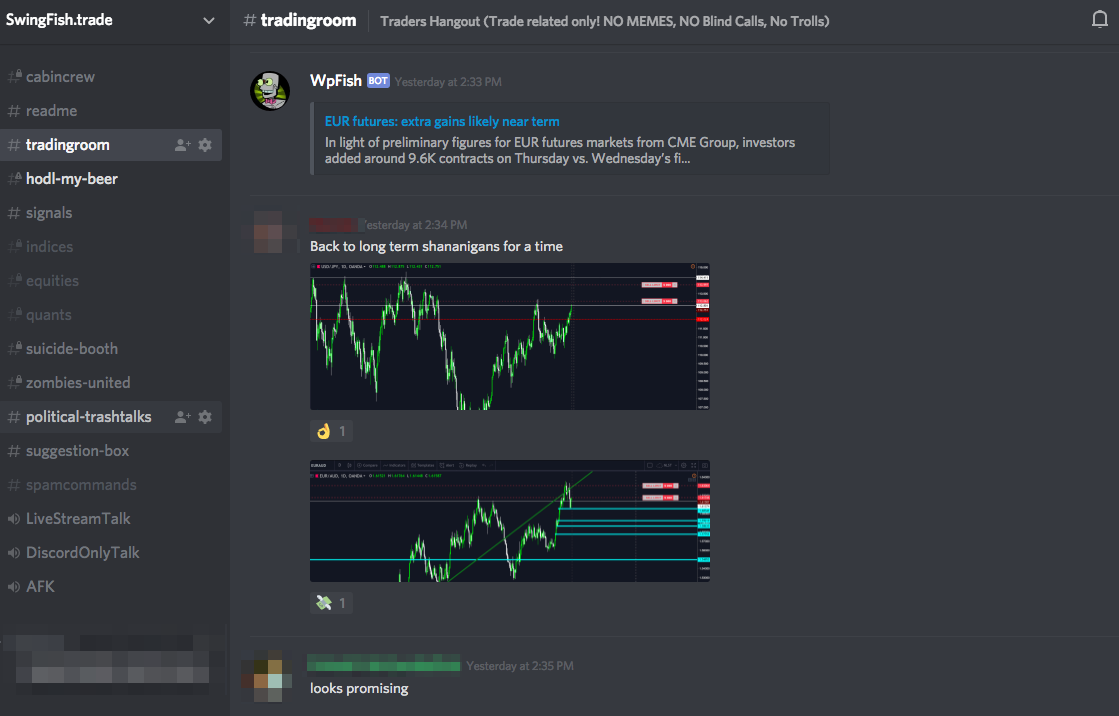 This Discord Chat is for Traders, Investors and anyone like to see the action or just have some Fun.
you can be a Complete beginner, or a Seasoned Pro, everyone is welcome here.
the Server was created March 17, 2017, to use for Free, and always will be, there are currently 517 Users Online.

By Joining the chat you agree to ALL of the following terms:

there are 6 Main Groups, that appear in a different colors,
this is to help you on seeing the different horizon's of individual users.

Example one User may suggest a Sell, where another may tend more to Buy the same Symbol,
they both can be Right if they look at different Timeframes.
to avoid this, all users are asked to state the general Timeframes they trade in.

users with the Tag "CabinCrew" are Moderators and can help you with some Issues.

users with the Tag "First Mate" are Trusted Members of our community.

Bot's are Helpers to keep things as it should be, and provide you with Information

this Bots here are Specifically designed for SwingFish.trade!
Bots are NOT transferable to other Discord Servers!

Hermes the SwingFish Bureaucrat
developed by EnFoid, free to use for anyone in the channel.
Hermes does run on the old "Discord-PHP", which been declared dead, that does pose some documentation and development issues,
as a result of that, sooner or later Scruffy, will take over all of the public features.
where Hermes will only focus on internal stuff, such as account balances, and management tasks, lender integrations and so on.

Scruffy the SwingFish Janitor
developed by twentysix26, enhanced & customized by EnFoid
this bot is still in development, and will take over most of the Functions Hermes does right now.
Scruffy makes News announcements in the Voice Channels according to Hermes.

other bots that are permitted to be inside this chat but not controlled/owned by SwingFish:
DiscordServers, Nightbot, Pateron