Yearn.Finance has consistently recovered from the recent dip to $25,000. The price drop was not unique to the decentralized finance (DeFi) token but affected the entire cryptocurrency space. Bitcoin tumbled to $30,000, while Ethereum retested $900. On the other hand, Ripple’s mission to hit levels at $0.4 was cut short, with losses hitting $0.25.

Meanwhile, Bitcoin is trading slightly above $36,000 amid growing uncertainty. The flagship cryptocurrency could spike to $40,000, but bulls seem exhausted; hence, the odds favor a breakdown back to $30,000.

YFI is exchanging hands at $38,530 after retracing from higher price levels around $40,000. The spike in price followed the formation of an ascending triangle pattern.

The DeFi token endured a massive breakdown after topping $41,000 in the first week of January. While its price has made a series of higher lows since then, the $36,000 resistance level continued to reject Yearn.Finance from advancing further.

A recent spike in the buying pressure behind the token allowed it to break above the overhead resistance. Now, it could shoot up nearly 24% based on the ascending triangle formation. This target is determined by measuring the distance between the two highest points of the triangle and adding it to the breakout point. 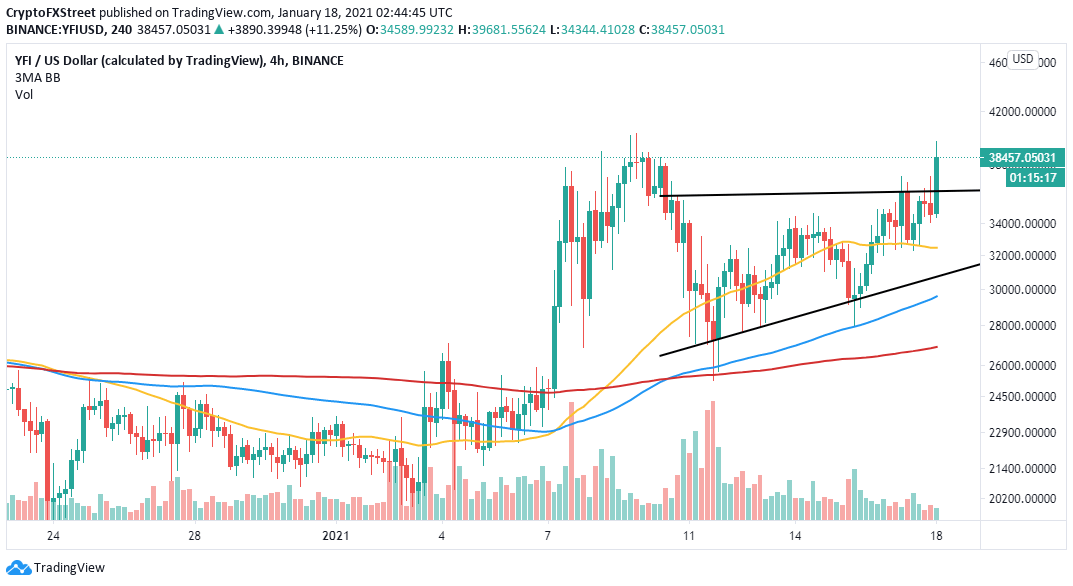 IntoTheBlock’s IOMAP model reveals the absence of a robust supply barrier that will prevent Yearn. Finance from achieving its upside potential. Based on this on-chain metric, only one major area is of interest to the bulls and runs between $37,254 and $38,423. Here, roughly 760 addresses are holding a total of 154.4 YFI.

This area may act as a formidable barrier and absorb some of the buying pressure seen recently. Holders who have been underwater could break even on their positions, slowing down the uptrend. But if Yearn.Finance can slice through this hurdle, and it would likely climb to $42,000.

On the flip side, the IOMAP cohorts show that YFI sits on top of stable support. Roughly 926 addresses bought approximately 3,900 YFI between $31,850 and $32,956. This crucial area of interest suggests that bears will struggle to push prices down. Right now, the odds favor the bulls.

It is worth mentioning that the breakout to $42,000 may be invalidated if YFI closes the day under $40,000. Overhead pressure could force the DeFi token retest support at the triangle’s x-axis. The lower price levels expected to provide anchorage include $34,500, the 50 Simple Moving Average, and $28,500.

Summary of comments via RBC on their view for gold this year:

Positive factors for gold bode well for gold to average $US1922 over Q1:

For bank trade ideas, check out eFX Plus

Army Secretary Ryan McCarthy told The Associated Press on Sunday that officials are conscious of the potential threat, and he warned commanders to be on the lookout for any problems within their ranks as the inauguration approaches. So far, however, he and other leaders say they have seen no evidence of any threats, and officials said the vetting hadn’t flagged any issues.

Gold takes the bids near $1,832, up 0.29% intraday, during early Monday. The yellow metal refreshed a multi-day low before bouncing off $1,802.80 but the corrective recovery needs to cross 200-day SMA to convince the buyers.

As a result, the current run-up eyes 200-day SMA level near $1,845 whereas the previous week’s top surrounding $1,865 will act as an extra upside barrier.

Although bearish MACD defies any further upside, a clear run-up past-$1,865 will eye the $1,900 threshold.

Meanwhile, an upward sloping trend line from March 2020, currently around $1,823, teases the gold sellers as a daily closing beneath the same will challenge the November 2020 low of $1,764.60.

In doing so, the $1,800 round-figure may offer an intermediate halt to the gold bears while April 2020 top near $1,748 can lure the downside moves afterward.

Overall, gold prices are likely to remain depressed unless marking a notable strength above 200-day SMA.

A summary of remarks from RBC’s response to this earlier news:

RBC see a glimmer of hope:

NZD/USD drops towards 0.7100 despite mixed data from China

NZD/USD fades bounce off 0.7116 while declining to 0.7125, down 0.16% intraday, during early Monday. The kiwi pair recently eased as China’s activity numbers flashed mixed results. Also weighing on the quote could be the risk-off mood and the broad US dollar strength amid a light calendar and an off in the US.

Talking about risks, the fears that US President-elect Joe Biden will discard American oil ties with Canada due to environmental issues as well as uncertainty over his fiscal stimulus to get accepted at the Federal Reserve also weigh on the risks.

Further, the incoming US Treasury Secretary Janet Yellen is likely to keep her commitment to the US dollar’s market-determined value which in-turn may challenge the latest upside momentum of the greenback and probed the mood off-late. Additionally, the virus woes are also present as the US, Europe and Japan witnessed a sustained increase in the coronavirus (COVID-19) numbers even if figures from the UK have been a bit low off-late. Also challenging the sentiment could be risks surrounding the spread of virus variants and doubts over the political career of Japanese PM Suga due to the virus.

Against this backdrop, S&P 500 Futures and stocks in Asia-Pacific remain depressed while the US dollar index (DXY) rises to a fresh high since December 21.

Looking forward, a lack of major data/events as well as Martin Luther King’s Birthday in the US will limit the market moves. However, any challenges to risks, which are more likely, will not hesitate to bring the NZD/USD prices southwards.

While an ascending trend line from November 13 near 0.7155 guards the quote’s immediate upside, 21-day SMA surrounding 0.7175 adds to the upside filter and directs NZD/USD sellers towards the early December 2020 high near 0.7100.

AUD/USD struggles for direction around 0.7700 amid mixed China data dump

AUD/USD wavers around 0.7700 following mixed data releases from China during early Monday. The quote initially pierced the 0.7700 threshold while cheering upbeat GDP and Industrial Production data from the largest customer but couldn’t ignore weaker than expected Retail Sales. Also challenging the quote could be risk-off mood and the US dollar strength.

Considering the lack of reaction to China data, AUD/USD traders seem taking clues from the risk catalysts where S&P 500 Futures and stocks in Asia-Pacific stay heavy by the press time.

Behind the moves could be the chatters that US President-elect Joe Biden will cancel Canada’s Keystone XL pipeline permit and upcoming Treasury Secretary Janet Yellen’s commitment to market-determined dollar value. Also, the coronavirus (COVID-19) woes and doubts over China’s economic improvement are an extra burden that weighs on the AUD/USD prices.

Virus numbers have receded in the UK while those from the US and Japan remain worrisome. Global vaccine producers remain optimistic over the capacity to tame the virus strains but fail to defy the woes. At home, Australians can avail overseas travels from now while much of Sydney cleared for Victorians to return from 6:00 pm tonight. However, there are 10 council areas in Sydney’s West and south-west regions that still bear the tag of “Red” zones.

Having witnessed the initial impact of the Chinese data dump, AUD/USD traders may revisit the risk catalysts as the Wall Street Journal earlier raised doubts over China’s economic improvement, based on the report from the International Monetary Fund (IMF). It should, however, be noted that major attention will be given to the hints on how the Biden government will act during the initial ruling and the virus updates for short-term direction. Traders should also take note of the US off, due to Martin Luther King’s Birthday, as this will reduce market moves.

AUD/USD sellers cheering downside break of an ascending trend line from November 02, at 0.7732 now, need validation from 21-day SMA level of 0.7682, to firm up the grips, failing to do so can re-direct traders toward the 0.7800 threshold.

China Industrial Production (YoY) registered at 7.3% above expectations (6.9%) in December