AUD/USD Forecast: Corrective decline could continue at the beginning of the week 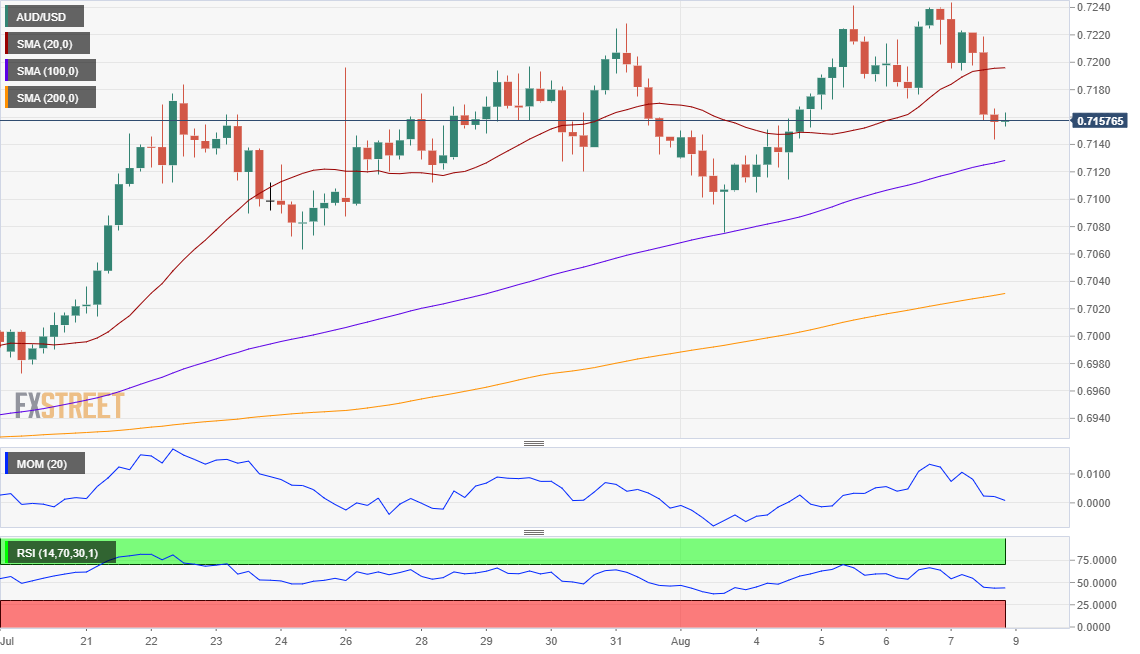 The AUD/USD pair closed Friday little changed around 0.7160, but a seventh consecutive week with gains. Increased demand for the greenback kept the upside in check, alongside encouraging Chinese data released at the beginning of the day. According to the official report, the July Trade Balance in the country surged to $62.33B with imports and exports rising by more than expected. The RBA released the Statement of its latest Monetary Policy, which was not that encouraging. Policymakers believe the jobs market will take longer to recover from the ongoing pandemic, while growth for 2021 has been downwardly revised to 5%. This came after Australian PM Scott Morrison said that the Treasury had estimated Victoria’s lockdown would reduce the size of the economy in Q3 by between $7 billion and $9 billion.

Australia won’t release relevant macroeconomic data at the beginning of the week, but China will publish July inflation data. The yearly CPI is foreseen at 2.6% from 2.5% previously, while the Producer Price Index is expected at -2.5% from -3% in the same period.

The daily chart for the AUD/USD pair shows that the bearish potential remains limited, as the pair continues to develop above all of its moving averages, while technical indicators eased from their highs, but remain within positive levels. In the 4-hour chart, the par is below its 20 SMA, which anyway lacks directional strength, but holds above the larger ones, which retain their bullish slopes. The Momentum indicator heads firmly lower below its midline while the RSI stands around 44, favouring another leg south, mainly on a break below 0.7140, the immediate support level.

View Live Chart for the AUD/USD