EUR/USD Forecast: Biden knocks euro down, Powell may send it over the edge

More government money is better for the dollar – at least when it comes to fiscal stimulus. Media reports that President-elect Joe Biden is set to announce a generous stimulus package worth some $2 trillion has boosted markets and the dollar. Investors had speculated that the scope of the relief would hover around $1.3 trillion.

Why is the greenback gaining ground? An increase in government debt triggered a move to stocks from bonds, pushing US Treasury yields higher and making the dollar more attractive. Moreover, with additional support from Uncle Sam, the world’s largest economy could grow at a faster clip, another boost to the underlying currency.

Biden speaks only at 00:15 early on Friday, and reports from Washington could provide additional details about the package. It is set to include direct payments to all Americans, expanded unemployment benefits, and aid to state and local governments.

Will the Federal Reserve buy additional US debt and push the dollar back down? Or will it see rising yields as a sign of upcoming economic strength and even consider tapering its scheme? Several officials at the Fed have been rejecting the option of an early reduction in debt purchases  – but the mere discussion about scaling the program down rather than expanding it has been supporting the dollar.

Jerome Powell, Chairman of the Federal Reserve, has the final word – and he speaks on Thursday, ahead of Biden. The world’s most powerful central banker does not need to address the Fed’s $120 billion/month scheme – only comment about the future. If he is optimistic, the dollar could rise, and if he is cautious, it could fall.

The fiscal/monetary dance comes on the backdrop of outgoing President Donald Trump’s second impeachment – a historic first. The House issued a rebuke to Trump for inciting an insurrection, following last week’s riots in the Capitol.

Despite support from ten Republicans, the Senate is unlikely to initiate a trial to oust the president before his term ends in six days. Investors are only concerned about potential violence around Biden’s inauguration.

While the focus is on the post-pandemic future, a snapshot of the current, grim present is also of interest. Weekly jobless claims are set to remain elevated near 800,000 as coronavirus continues raging in the US. The daily death toll refuses to drop below 4,000 and hospitals are under pressure.

The situation in Europe is even worse, with Germany recording a new mortality peak as it mulls extending its lockdown. The government in the old continent are under pressure to ramp up their vaccination campaigns. Most countries in the old continent have administered the jabs to only roughly 1% of the population, compared to over 3% in the US.

The European Central Bank’s meeting minutes from the December decision are also due on Thursday. However, ECB President Christine Lagarde already spoke on Wednesday, providing an up-to-date take on the current affairs. Lagarde said that uncertainty is lower after Brexit, the US elections, and the vaccines. Her words failed to help the euro – and it is hard to see how the ECB minutes can boost it.

Overall, the focus is on the US – with money from the government boosting the dollar while Fed funds push it lower. 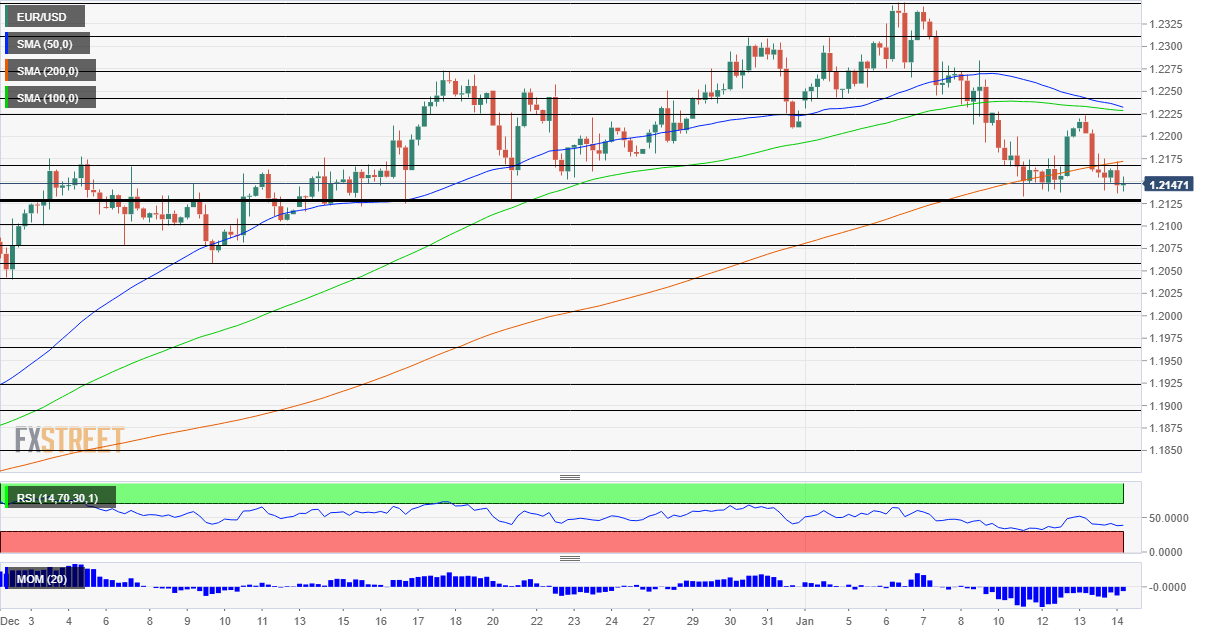 Euro/dollar has been on the back foot, with momentum on the four-hour chart pointing to the downside. The currency pair has dropped below the 200 Simple Moving Average, adding tot he bearish case, while the Relative Strength Index is holding above 30, outside oversold conditions.