The US stock market was under some extreme pressure especially in the Nasdaq and Russell 2000 market sectors on fears of inflation and the prospects of the Fed unwind of stimulus measures as a result of it.

With the Fed’s Powell testimony schedule for 10:00 AM start  (and with the reading of the testimony along with other pleasantries and posturing associated with such proceedings), there were minutes of anxiety that took the Nasdaq and Russell indices down -3.91% and -3.64% respectively in the first hour of trading. The S&P index fell -1.83% and was on its way to the 6th down day in a row.

However, as the testimony went along, Powell took some of the fear out of the market (at least) and the price started to recovery in a choppy manner.

The Fed Chair stuck to his recent story of more transitory inflation and the need to get the Covid job losses back as his focus. He did not take the bait to define markets as bubbles.    He even added that “we have not been making substantial progress toward goals in the past three months”.

Of course, the “markets” don’t necessarily trade on what is in the rear view mirror, but more on what is down the road (hence why bond yields can still go higher). Nevertheless, his comments did assuage some of the stock markets anxiety.

The major indices ended the day mixed (European markets were also mixed), but the “end of the world” as we know it was avoided (for today at least).

In the forex market, the biggest mover was the CHF to the downside as it saw declines of -0.87% to -1.40% across the major currencies. The biggest decline came against the GBP (the GBP was the strongest) at -1.40%. It lost -1.05% vs the US and -0.96% vs the EUR.  Flows may be giving up on the safe haven benefits of the CHF. The USDCHF is closing above its 100 day MA for the 2nd time this month and the 2nd time since the end of May.  The GBPCHF and EURCHF have been running higher since early January for the GBPCHF (helped by Brexit) and early February for the EURCHF).

For the USD, the greenback is ending the day mixed with declines vs the GBP, CAD and NZD, and gains vs the CHF (mostly) 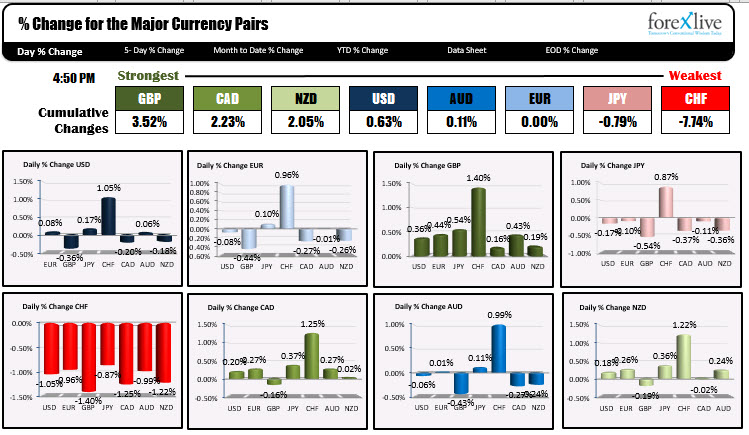 US dollar slide continues ahead of Brainard

AUD/USD climbs to daily highs above 0.7800 as USD weakens on falling T-bond yields