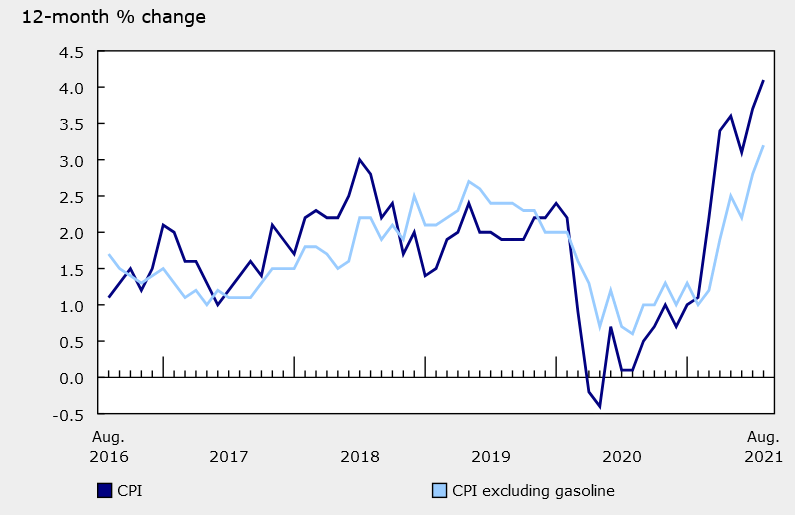 Canadian CPI was higher than anticipated in August but the Bank of Canada is likely to look through it and stay the course, according to economists at CIBC.

“Canadian inflation climbed even higher-than-expected in August, but that might represent the summit of the mountain,” wrote economist Royce Mendes.

He noted this period of gains comes after pandemic-induced weakness and that the BOC will stay the course. He also noted that the 40% surge in airfares in the report was a mirage. The component had been tweaked for months because of many missing routes but those were brought back en masse in this report.

The three core measures ranged from 3.3% to 1.8% but Mendes argues that BOC puts the most weight on the lowest one.

All three of the Bank of Canada’s core measures of inflation accelerated in August. However, the core-common
component indicator, which tries to filter out price movements that might be caused by factors specific to certain
categories and is highly correlated with the output gap, remained at just 1.8%. It’s showcasing that much of the
current inflation is being caused by unusual drivers which are unlikely to be sustainable. The Bank of Canada pays
very close attention to this metric, which will support the central bank’s view that much of the recent inflation is
transitory.

Overall, he argues that if you combine the past two years the inflation rate was 2% or right on the BOC target.

There are no comments on the Canadian dollar but the loonie is probably now feeling some of the effects of the election, which is on Monday. The Liberals and Conservatives are running close with one of the two headed for a minority government. Trudeau’s Liberals have regained some poll momentum as Conservatives bleed some support to the far right so it’s increasingly likely that he returns.

No matter the result (as in most elections) the market will breathe a sigh of relief afterwards.