The US Census Bureau will release the September Retail Sales report on Friday, October 15. Following an increase of 0.7% in August, Retail Sales are expected to decline by 0.2% on a monthly basis.

The general market view is that a positive surprise in the Retail Sales reading is likely to provide a boost to the greenback and vice versa. In order to understand how impactful this data is on the USD’s performance against its rivals, we analyzed the market reaction of four major pairs, EUR/USD, GBP/USD, USD/JPY and AUD/USD, to the previous 14 Retail Sales prints.

The FXStreet Economic Calendar assigns a deviation point to each macroeconomic data release to show how big the divergence was between the actual print and the market consensus. Although Retail Sales were unchanged in April, the deviation was -0.37 because analysts were expecting a 1% increase.

On the flip side, the 7.6% increase recorded in January against analysts’ estimate of 1.1% was a relatively big positive surprise with the deviation posting 5.82 for that particular release.

“Deviation: It measures the surprise caused when the Actual data differs from the Consensus. It can oscillate in an open scale, usually between -7 and +7.”

Next, we plotted the reaction, in terms of pips, of the major pairs mentioned above 15 minutes, one hour and four hours after the release to see if the general market view held. 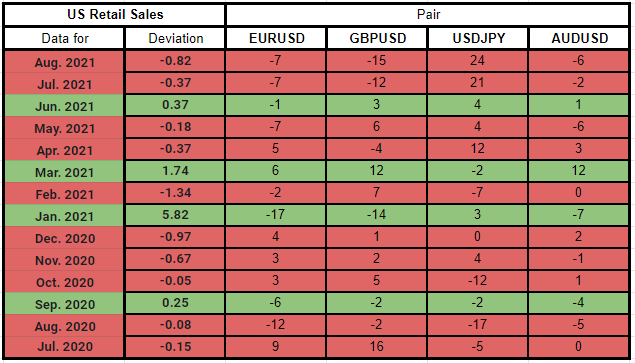 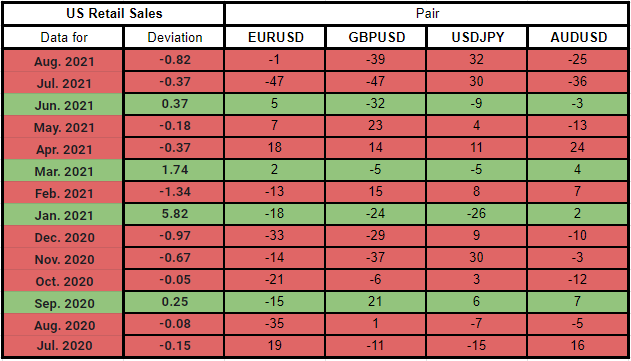 EUR/USD has a correlation coefficient of -0.46, -0.13 and 0 15 minutes, 60 minutes and 240 minutes after the release, respectively. These numbers suggest that the inverse correlation between the Retail Sales deviation and EUR/USD action is virtually non-existent one hour and four hours after the release. Although the initial reaction is somewhat correlated, the average pip-change is too small to consider it as a trading opportunity.

USD/JPY has a correlation coefficient of -0.05, -0.48 and -0.65 15 minutes, 60 minutes and 240 minutes after the release, respectively. The pair’s initial reaction to Retail Sales data is largely unpredictable. However, the correlation turns inverse one hour after the release and becomes significant by the fourth hour. This finding suggests that if Retail Sales print is better than expected, USD/JPY falls and vice versa.

AUD/USD has a correlation coefficient of -0.11, 0.05 and 0.16 15 minutes, 60 minutes and 240 minutes after the release, respectively, making it the least correlated pair, out of the four tested, with US Retail Sales surprises.

When there is a negative or a positive surprise in US Retail Sales data, the initial market reaction is insignificant. There is no clear relationship between the movements of EUR/USD, GBP/USD and AUD/USD pairs and the deviation one hour and four hours after the release. This could be due to the fact that Retail Sales is impacted by temporary factors, such as weather conditions and holiday seasons, making it an unreliable leading indicator.

The most interesting finding is the strong inverse correlation with USD/JPY and Retail Sales deviation four hours after the release. Nevertheless, the average pip-change on that time frame is 10.5 and 1.75 pips on a negative and positive deviation, respectively, not providing enough room for a trading opportunity.