Leverage does not have to be confusing, simply think of it as dynamic Credit the broker does grant you, in fact, it’s just that, nothing more – nothing less.

basically, that means that the Bank gives you a Leverage of 1:3 on your Income.

Using it wisely, buying 3 times the stuff what you can and sell it shortly after for a profit, paying back your Credit Card bill to 100% at the end of the month is a “Trade” made with all your available Leverage.

so let’s assume you could not sell all of it, and you won’t be able to pay back all of your Credit to the bank, then the bank will charge you a pretty hefty Interest, in trading, this is called “Swap” (the broker charges you that every day during Rollover if you hold on to positions)

holding on to positions is just the same as extending the holding time on credit on your CreditCard.

Myth 1: you do NOT make more money with more Leverage!

see the 2 Screenshots of orders made on different accounts 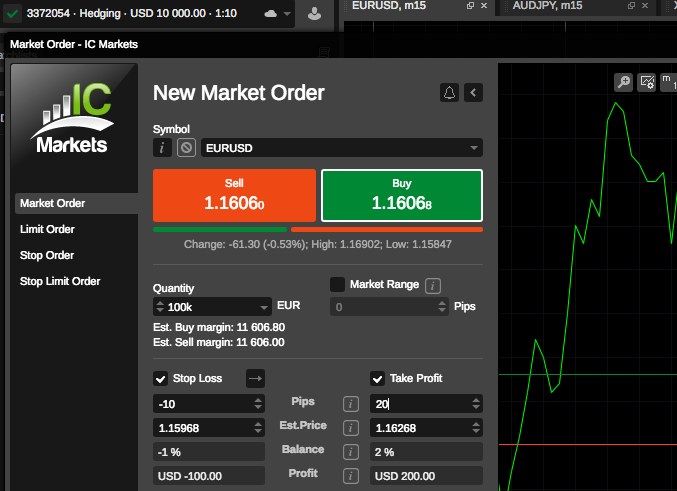 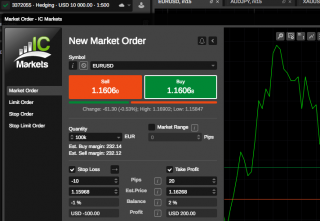 as you can clearly see, both orders will have the same monetary and percentage outcome regardless of Stop or Take Profit is Hit.

Myth 2: You do not lose more just because of leverage!

as you can see in the pictures above, both orders also have the same “cost” if you do lose the trade, so the losses will be the same.

where Leveraged trading goes usually wrong is by taking it the wrong approach, peoples “assume” the leverage as a risk parameter instead of the Monetary risk, and this is where things go bad.

Just because you have 500Hp on your disposal, and a top speed of 250mph, does not mean you were forced to drive with 180Km/H through a school zone, it’s simply irresponsible, Stupid and against the law to do so!

it’s not Illegal to buy/sell 200 or even 1000 times the funds you do have at your disposal,
but it is just as irresponsible and Stupid as driving like a maniac and risking other peoples lives.

your risk is not to be killed physically, but you can be killed financially.

a sudden market movement as an example can cost you far more than your Initial deposit.

NO, a Stop-loss order can NOT safely protect you from such an event! (we will make a few example posts about this)

even if there is no Fundamental or Technical reason for this to happen, keep in mind you basically shaving with a chainsaw by doing so, sure it can end up extremely smooth at a very short amount of time. but the chance that you will just cut your head off is a lot larger.

Leverage can be a VERY Powerful tool, as (just like with a SportsCar you are able to make Sprints in an extremely short period of time).

the very same does apply by trading with Leverage, if you in a situation where you meeting high probabilities, and the price movement against you to prove you are wrong is in a short distance, Leverage can be a VERY powerful tool, as it will allow you to buy/sell assets on an extremely large scale, by maintaining the same relative risks. (yes relative!!)

this is where Leverage becomes a powerful tool, instead of a curse.

Why all eyes are on the Cardano price this weekend

Don’t believe the hype, the Shiba Inu price will pullback