(Previous analysis as well as outside sources – italics).

Europe’s single currency journeyed to a peak of 1.1145 against its US counterpart last week, adding more than 200 pips into Friday’s close.

With respect to the long-term trend, the pair has remained under pressure since topping in early February 2018.

A turn from 1.1157/1.1099 this week positions 1.0995 on the hit list as support; alternatively, additional upside has resistance at 1.1239 calling for attention (essentially the same base as weekly QM).

As evident from the H4 chart on Friday, early London tackled 1.11 and latched onto a healthy bid to highs at 1.1145. Heading into US trading, however, optimism waned, returning the H4 candles south of 1.11 into support at 1.1088, a prior Quasimodo resistance level.

Despite weekly price exhibiting scope to push for 1.1222 this week, a pullback is not out of the question, according to daily resistance between 1.1157/1.1099.

Sterling chalked up a solid performance against the buck last week, extending recovery gains to a peak of 1.2394.

The daily window has buyers and sellers battling for position around range lows at 1.2279, with buyers communicating a somewhat stronger position into the close.

For traders who read Friday’s technical briefing you may recall the following (italics):

Although traders may witness H4 Quasimodo resistance at 1.2352 cap upside, the area between 1.2428/1.2395 on the H4 timeframe, technically speaking, emphasises a stronger base due to the number of technical resistances making up the zone.

Leaving 1.2428/1.2395 unchallenged Friday, albeit by a pip, the resistance base, therefore, remains an area of focus this week.

Alternatively, a close underneath 1.23 may have breakout sellers make a stand, primarily targeting 1.22. Conservative breakout strategies, though, may call for a retest at 1.23 before sellers commit. 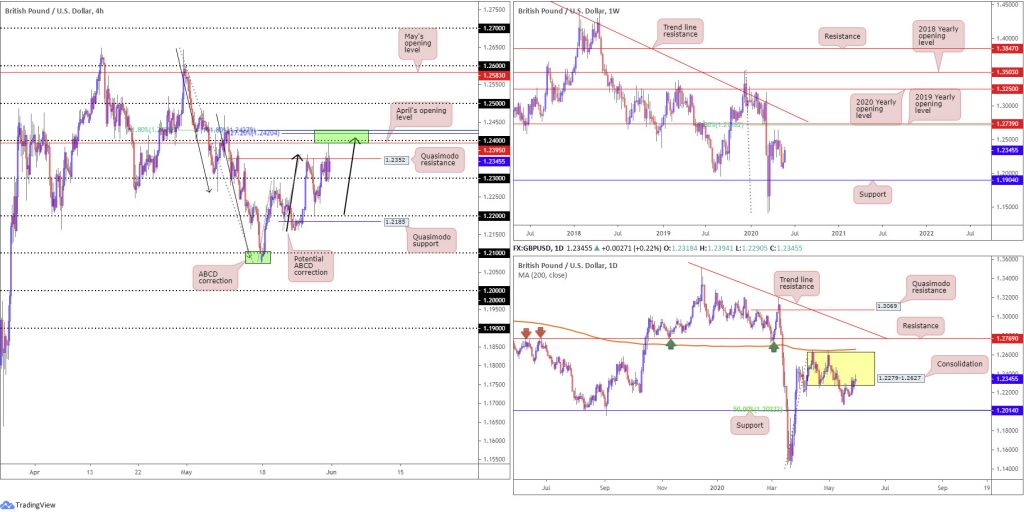 The Australian dollar held onto the bulk of its gains against the US dollar last week, consequently extending gains for a second consecutive session and inviting an approach to resistance at 0.6677.

A rotation from this angle has support at 0.6359 to target; breaching current resistance, nonetheless, could have the pair journey to Quasimodo resistance at 0.6929.

Price action on the daily timeframe currently has its 200-day SMA (orange – 0.6654) rubbing shoulders with weekly resistance highlighted above at 0.6677.

Elbowing through 0.6677 on the daily chart unlocks nearby resistance priced in at 0.6751. Owing to the hesitation seen (via candlestick analysis) from the sellers mid-week, a pop to 0.6751 is certainly in the offing.

Circling above the aforementioned resistances is the 0.67 handle, a widely watched figure.

Another constructive development on the H4 timeframe is a rising wedge pattern, created between 0.6505 and 0.6616.

A couple of scenarios are possible this week, both directed at sellers given weekly resistance in motion at 0.6677

Action concluded the week eking out a third consecutive gain, swimming in close proximity to the 2020 yearly opening level at 108.62, a notable port of resistance.

Although we dipped to lows at 107.07 Friday, movement has been kicking its heels within striking distance of the 200-day SMA (orange – 108.30), with a break exposing the 109.38 April 6 high. Quasimodo support at 106.35 represents a reasonably significant ‘floor’ in the event we tunnel through 106.95 this week, with a violation shining the spotlight on support at 105.05.

Sell-stops south of March’s opening level at 107.38 were filled Friday after knocking on May’s opening level at 107.12 heading into London. As can be seen from the chart, buyers came out swinging as we transitioned into US hours, reclaiming 107.38+ status and closing the week within reaching distance of 108.

A fakeout through 108 into the 200-day SMA at 108.30 is a potential scenario possibly interesting sellers this week. Buy-stops contained above 108 may provide enough fuel to sell. Conservative traders, however, may seek a H4 close back beneath 108 before committing.

The H4 ABCD correction at 108.37 also marks an interesting reversal zone, an area boasting a relatively close relationship with H4 Quasimodo resistance at 108.70 and weekly resistance at 108.62 (the 2020 yearly opening level).

To the downside, 107 is a particularly interesting support given its relationship with daily support at 106.95.

In the shape of a near-full-bodied bearish candle, last week’s action welcomed the 2016 yearly opening level at 1.3814. With price dipping a toe in waters south of the said level and buyers so far displaying little sign of recovery, this perhaps sets the stage for an approach to support at 1.3520 this week (prior Quasimodo resistance level), a base sited just above the 2017 yearly opening level at 1.3434.

Since April, price action has been carving out a descending triangle pattern between 1.4349 and 1.3855, with Tuesday breaking out to the downside in impressive fashion and also taking on nearby support at 1.3807.

Following Tuesday’s precipitous decline, downside momentum subsided considerably into the week, hugging the underside of 1.38, which, as you can probably see, boasts a close connection to daily resistance at 1.3807.

Assuming buyers take a back seat at the 2016 yearly opening level drawn from 1.3814, sellers may remain in the driving seat this week. 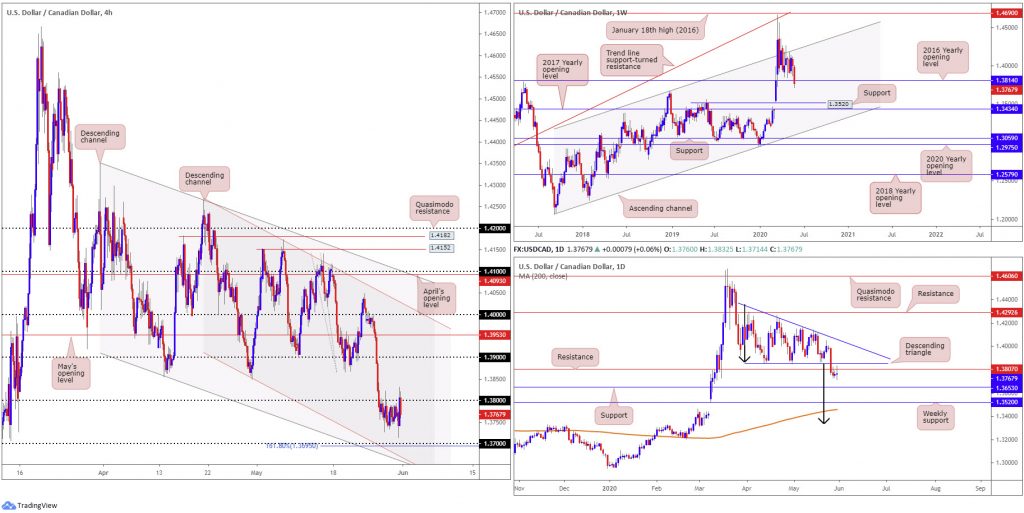 Technical structure above 0.9732 is seen at the 2019 yearly opening level drawn from 0.9838 and trend line resistance, taken from the high 1.0226. Should we remain starved of support this week, nonetheless, this could eventually draw the candles to a point of support at 0.9447.

Since early April, price action on the daily timeframe has consolidated between 0.9802/0.9597, with the week wrapping up at the lower boundary of the range.

Traders may also want to acknowledge the 200-day SMA (orange – 0.9780) joins the upper border of the aforementioned consolidation. Outside, traders will note resistance rests at 0.9848 and support from 0.9542.

Buyers staged an intraday recovery Friday off trend line support, extended from the low 0.9665, though failed to sustain gains south of trend line support-turned resistance from 0.9638. Friday concluded marginally under April’s opening level at 0.9618, highlighting 0.96 as possible support today/early week. Note this boundary has capped downside since April – a decisive break reveals daily support at 0.9542 and the 0.95 handle based on the H4.

The broader focus, thanks to weekly price unseating the 2020 yearly opening level at 0.9671, places sellers in the brighter light this week. However, before sellers can stretch their legs, engulfing 0.96 on the H4 and the daily range low at 0.9597 is required.

Bearish strategies under 0.96, therefore, may be a consideration this week. Conservative players may opt to wait for a retest at 0.96ish before engaging. This helps avoid a fakeout scenario through 0.96, which is common viewing around psychological figures.

Sustained upside could eventually have the 2020 yearly opening level at 28595 emerge.

Interestingly, into the closing stages of the week, price action broadcasted a hammer candlestick pattern north of 24934 and trend line support, taken from the low 18213. The 200-day SMA (orange – 26336) is seen as the next upside target.

Major US benchmarks mostly booked healthy gains Friday after US President Trump refrained from touching on the subject of China tariffs during his press conference. The Dow Jones Industrial Average dropped 17.53 points, or 0.07%; the S&P 500 added 14.58 points, or 0.48%, and the tech-heavy Nasdaq 100 concluded higher by 138.81 points, or 1.47%.

After overwhelming orders at a resistance zone plotted between 24934/24660, an area comprised of a daily support level at 24934 and the 2018 yearly opening level on the weekly timeframe at 24660 (blue), March’s opening level at 25823 made an appearance on Thursday. This guided the candles to lows at 25058 Friday before staging a swift comeback into the close.

24934/24660, now representing support, is in position for a possible retest play this week, with particular emphasis placed on daily trend line support, extended from the low 18213.

Having seen both weekly and daily price in position to climb this week, its unlikely we’ll see much selling occur off March’s opening level at 25823 on the H4 timeframe. Buying north of the level could be an option, targeting a resistance area at 26885/26515, a zone located just above the 200-day SMA. 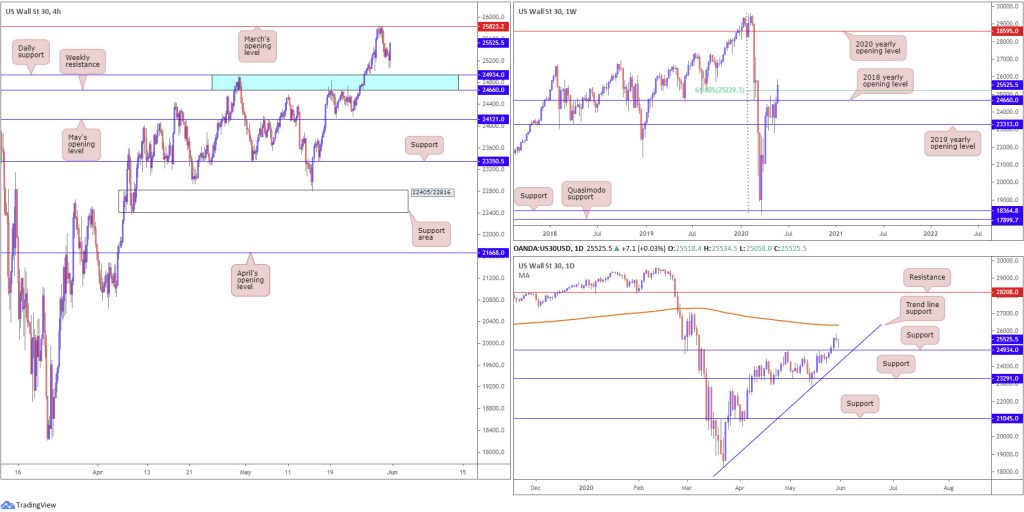 The technical landscape on the weekly timeframe has, from mid-April, seen buyers and sellers battle for position around the underside of Quasimodo resistance at 1739.6.

In view of last week’s strong buying tail, clearance of 1739.6 may take shape, underlining another layer of Quasimodo resistance at 1787.4.

It may also interest some traders to note the trend on gold has faced a northerly trajectory since 2016.

The bullish pennant configuration on the daily timeframe, established from a high of 1747.7 and a low coming in from 1658.1, remains in play.

Mid-week, as you can see, had price retest the pattern’s upper edge as support. Though dipping to lows at 1693.9, buyers are seen attempting to make a comeback here. Take-profit targets out of pennant patterns are measured by taking the preceding move (black arrows) and adding the value to the breakout point. This offers a sizeable take-profit, coming in at 1909.4.

For those who read Friday’s technical outlook you may recall the following (italics):

Traders long current H4 support will be watching for H4 price to drive through H4 trend line resistance, perhaps regarded as a cue to reduce risk to breakeven and bank partial profits. H4 trend line support-turned resistance, taken from the low 1668.0, fits as the next hurdle to the upside, which actually intersects closely with weekly Quasimodo resistance mentioned above at 1739.6.

As evident from the H4 chart, we did indeed cross through H4 trend line resistance from 1765.1 on Friday and tested waters just south of H4 trend line support-turned resistance, taken from the low 1668.0, before mildly turning lower and forming a bearish outside candle pattern by the close.

Traders long current H4 supports have likely reduced risk to breakeven and banked a large base of their position ahead of the close. Leaving a small portion of the position to run is an idea. Granted, we do have weekly Quasimodo resistance in play, though at the same time we also have a daily bullish pennant in motion, too.

The accuracy, completeness and timeliness of the information contained on this site cannot be guaranteed. IC Markets does not warranty, guarantee or make any representations, or assume any liability regarding financial results based on the use of the information in the site.

News, views, opinions, recommendations and other information obtained from sources outside of www.icmarkets.com.au, used in this site are believed to be reliable, but we cannot guarantee their accuracy or completeness. All such information is subject to change at any time without notice. IC Markets assumes no responsibility for the content of any linked site.

The fact that such links may exist does not indicate approval or endorsement of any material contained on any linked site. IC Markets is not liable for any harm caused by the transmission, through accessing the services or information on this site, of a computer virus, or other computer code or programming device that might be used to access, delete, damage, disable, disrupt or otherwise impede in any manner, the operation of the site or of any user’s software, hardware, data or property.

CFTC commitments of traders. JPY longs increase vs the USD in the current week

CFTC commitments of traders. JPY longs increase vs the USD in the current week

All Trump’s announcements on China were rumored or reported. Market breathes a sign of relief

All Trump’s announcements on China were rumored or reported. Market breathes a sign of relief

Nothing new here
Markets shuddered early in Trump’s talk because there was a lot of sound and fury but when he got to the actual policies, there was nothing new.
Full Article

Trump: China raided our factories and gutted our industries

Trump: China raided our factories and gutted our industries

Yeah, that’s what I meant…

Yeah, that’s what I meant…

Pres. Trump speaking live from the rose garden on China and potential sanctions
The president is scheduled to address the press at 2 PM ET on China including potential actions President Donald Trump has discussed targeting China’s financial sector through sanctions and trade policy in retaliation for Beijing’s moves to curb Hong Kong’s autonomy, according to people familiar
Full Article
Rewind